Gozenshu Brewery (Tsuji Honten Co., Ltd.) was founded in 1804 in Katsuyama, Okayama by Yahei Tsuji, originally a mercer who ventured into brewing business.

Gozenshu’s sake was initially sold under “Man Etsu” (萬悦) brand, however it was later changed to the current name after the sake was purveyed to the Lord Miura, the ruler of the locality in the mid to late Edo period (18th-19th century.)

Katsuyama is located in the region of Mimasaka (an old name for the northern Okayama) which had been long known as “Umasake no Kuni” (literally translated as “the country of fine brew”.)

With its chilly climate coupled with fine ground water and good sake-rice, Katsuyama bears an ideal environment for sake-making. Indeed, such regional benefits helped form Gozenshu’s motto: “Being responsible for making the finest sake with locally-sourced rice, water and true local craftsmanship.” Over generations, the philosophy has always inspired the brewers to strive for making the best sake without any compromise.

We, at Gozenshu, have been eager at making junmai sake for over four decades long before the recent junmai fad emerged. It is safe to say that junmai makes up for about 70 percent of our overall products.

In the recent years, the brewing is led by Okayama’s first female master brewer Maiko Tsuji (7th generation of the family) who inherited the position of her mentor Takumi Harada after his death in 2007. Harada was a well-known master who had worked for Gozenshu for more than 40 years. With Tsuji steering her team of young brewers, Gozenshu Brewery has been revitalized and continues to dedicate itself in the artistry of sake-making.

Tsuji family was also keen at pursuing cultural activities during Meiji and Showa periods. Since the family-heads of the times were so-called culturati, our brewery was visited by famous artists and writers by the likes of Tekkan and Akiko Yosano (author/poet), Saishu Onoe (poet/chirographer), Hekidoto Kawahigashi (poet/essayist) to name a few. On a side note, a Japanese literary giant, Junichiro Tanizaki (also a sake enthusiast) wrote one of his major novels, The Makioka sisters, while he was evacuated in Katsuyama during WW II. His temporary residence remains until now and continues to attract the visitors to the town.

In the recent past, the list of those who fondly visited our brewery includes Tatsuya Naramoto (historian), Yasaburo Ikeda (scholar), Kiyoshi Atsumi (actor) and Rokusuke Ei (lyricist).

“Cultural exchange through finest sake” was precisely what the history of Gozenshu is made up of. All was made possible through the earnest dedication of our ancestors who conveyed the true art of sake-making and its culture.

Gozenshu
- What We Are Aiming At.

With the team of young brewers, we, at Gozenshu Brewery, have been making untiring efforts in brewing sake combining the best of both worlds: a full-bodied-yet-clear-cut taste unique to Harada’s and modern smoothness which Maiko pursues.

Ingredients of sake are purely rice, koji and water. At our brewery, we try to use locally-cropped Omachi and Yamada Nishiki rice coupled with finest ground-water from the stream of Asahi River that flows alongside Katsuyama.

Despite some of the process being mechanized, the brewing counts on a human hand for the most part. The brewery retains its remnant from its foundation in 1804. What haven’t changed are the serious countenances of brewers who work around the clock during the brewing season which starts in November and ends in April - all through the coldest time of the year.

The photo on the right shows the fungi which started to grow on daiginjo’s koji. Brewers would check to see if fungal filaments are properly growing inside the grains of rice using a magnifying glass.

Located along Izumo Kaido (an ancient road which runs from Himeji, Hyogo to Izumo, Shimane,) Katsuyama was once a castle town which yielded 23,000 koku of rice. Gozenshu Brewery was established in 1804 (in the late Edo period) with its brand name deriving from the sake purveyed to the local lord, the Miura clan.

The brewery comprises two buildings with each standing on the east and west sides of the town’s main street. While the brewery’s main building is located on the east side, what sits on the west side is an old Japanese warehouse currently being used as a restaurant (Restaurant Nishikura). Both buildings date back to the late Edo to Meiji period which preserve an old town-house construction, featuring red-tiled roofs and Namako walls unique to the regional traditional architecture. The office area located in the southern part of the main building and ”Ishogura” (old storage for clothes) in the north are adding distinct aesthetic appeal to the town’s scenery. The elaborate decor and carving that can be seen on Ishogura’s doors and walls are the finest examples of early modern Japanese arts and crafts. Highly valued for its historical significance and pragmatic features, the brewery’s main building was registered as Tangible Cultural Property in November 2013. It came as a result of its contribution to Katsuyama’s historical townscape. 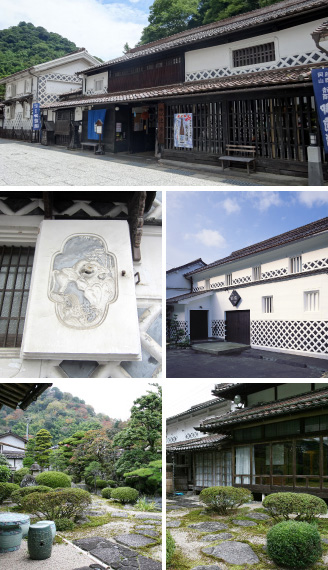 The two-story building was architecturally known as “Iriomoya Zukuri”, a wooden house with its guest rooms sticking out over the river bank on the stone wall. 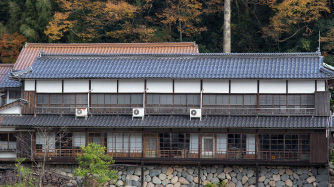